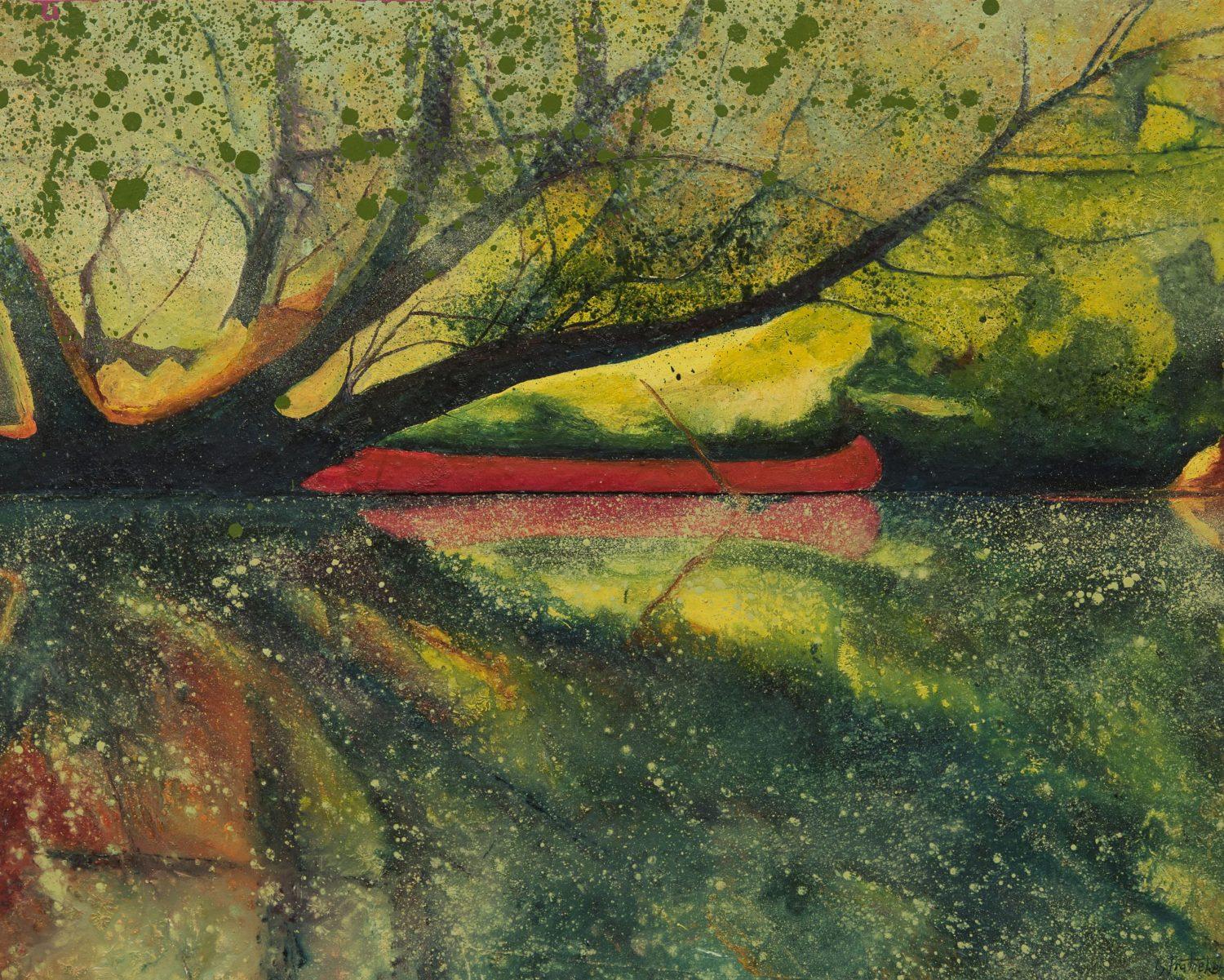 Gregor Pratneker: The path that led to the river

Gregor Pratneker: The path that led to the river

We kindly invite you to the opening of the exhibition “The path that led to the river” by Gregor Pratneker. The opening will be in Epeka Gallery, Koroška 8, on Friday, April 13th, at 19.00.

Since the time landscape painting was freed from its role of scenery and background in the western art tradition it represents one of the key genres that enable artists to explore the world, in which they live, and their perception and relation to it. Thus landscape painting is on the one hand a tool with which artists explore the attitudes of (contemporary) people to nature and the contrast between culture and nature, and on the other hand these artworks serve as a reflection of the artist’s “inner-scape”. The exhibition “The path that led to the river” presents Pratneker’s newer works, which can be divided into two groups. The first constitutes poetic depictions of nature, mostly forests and bodies of water, and sometimes also includes somewhat obscured human silhouettes. The second consists of works in smaller formats and explores the position of mankind in what, through centuries of growth, became its new “natural” environment — the city.
Art critics usually link Pratneker’s works to the postimpressionist tradition of painting both in his chosen motifs and style of expression. While his older works show unmistakable postimpressionist tendencies, the newer works mostly display them through distinct contours and the colour palette. Maybe the most intriguing aspect of paralleling Pratneker to the postimpressionist tradition is a consideration of his understanding of landscape and his relationship to the depicted matter. The western (pre-impressionist) tradition was based on a method of “seeing nature” not only as a physical given but perceiving it from an iconographical viewpoint and addressing it through more or less complex historical and social perspectives. Pratneker consciously avoids such a historical position and is, in a way, closer to the asian treatment of the genre as it was perceived through the filters of impressionist and postimpressionist traditions. The Chinese tradition, based on the philosophical and spiritual teachings of Taoism, has seen landscape painting as a medium that enables the visual expression of spiritual introspection of being in nature. In this the realistic depiction of nature is secondary.
Although the artist’s paintings are based on photographs, these only serve as support in the structuring of compositions and as an anchor for the recall of memories, feelings and thoughts. Pratneker’s works are in no way topographically oriented. The documentary material is a starting point for pictorial explorations that create a specific and personal atmosphere through the skilful use of complementary colours, cold and warm contrasts, the interplay of glazed layers of colour, the intensive palette and a degree of stylisation. The atmosphere fluctuates between the serenity found in nature and a degree of romanticist nostalgia for something (undefined) that we have lost with our detachment from nature. In his landscape paintings human figures are often present. These are strongly stylised, most often alone and facing away from the viewer. In the composition they serve as elements which invite the viewer into dialogue with the artwork but at the same time deny this very dialogue and thus stress the role of nature as the key protagonist. The figures are part of the landscape, a harmonic whole, and as such a symbol for a relation to the natural world that often seems lost or was never really there and is just a part of romanticist nostalgia, which is only possible because of our alienation from nature.
We can detect a homologous treatment of human figures in those paintings which depict the urban environment. The figures are painted in an economical manner and are distinctly stylised, their faces are blurred or hidden behind umbrellas in an almost defensive gesture. Event though the figures in the urban works are rarely depicted alone, they display an impression of loneliness and alienation that is absent from the landscape works. In the winter cityscapes the figures are placed in a kind of spaceless environment, in which they hurriedly wander into the unknown or loiter in small groups without forming a connection with those around them. This atmosphere is amplified with a sombre range of colours in clear contrast with the lively, almost glowing colours that compose the landscapes. The juxtaposition of the urban and natural works clearly illustrates the artist’s poetics and yearning that is the basis for his lyrical and somewhat melancholy works.
——————
Gregor Pratneker (1973) began painting in the 1990’s. He paints exclusively in the oil painting technique. In 2006, he graduated from the Department of Fine Arts at the Faculty of Education in Maribor with his thesis titled “The painting vedutas of Maribor” (mentors Marjeta Ciglenečki, Anka Krašna). Between 2007 and 2012 he was a post-graduate student at the Academy of Fine arts and Design in Ljubljana, receiving his MA with the thesis “Abstracting and form deformations in my painting”. His works have been shown in several solo exhibitions both home and abroad, as well as in numerous group exhibitions and art colonies.
In 2013 he received the May Salon Award and the Maribor Fine Artists’ Society (DLUM) Prize. His painting Zimsko jutro (Winter Morning) was presented at the legendary Autumn Salon in Paris in 2014. In 2015, he participated at the Salon of French Art at the Grand Palais in Paris, and in 2017 at the group exhibition The Project Room at the Bruno Massa Gallery in New York. In 2017 he again participated in the Autumn Salon in Paris and in 2018 in the Salon of French Art. He lives and works in Maribor.
——————
Epeka Gallery, Koroška cesta 8, 2000 Maribor
The exhibition will be open until May 9th 2018.

Epeka Gallery is open from Monday to Friday from 14.00 to 18.00. Outside the opening hours visits can be arranged by writing us at: epeka@epeka.si.

This exhibition is supported by the Municipality of Maribor